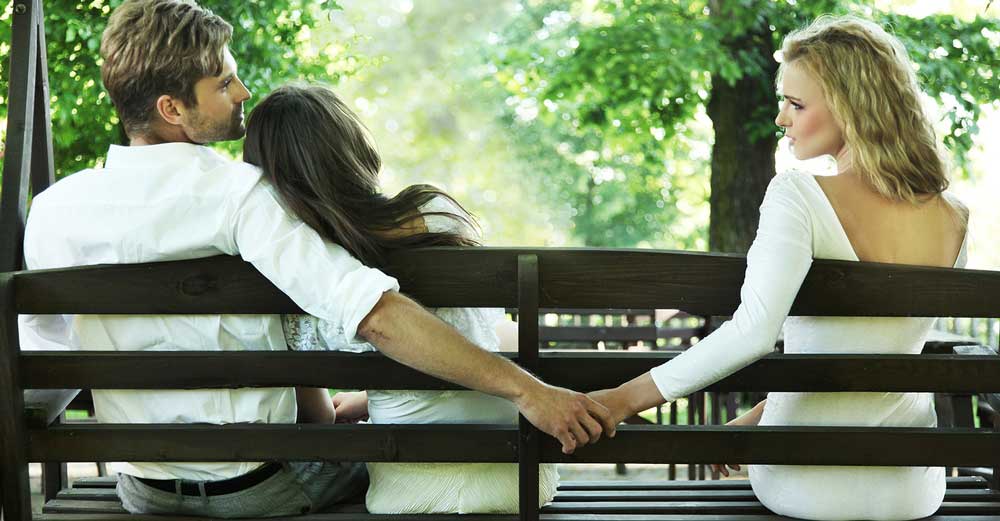 Betrayal comes in many forms including affairs, financial secrets, threats to leave or addictions such as gambling or substance abuse. All of these can have a massive influence on the health, well-being and overall quality of life not only of the person doing the betraying but also of everybody around them.

Affairs and betrayals can bring any relationship to breaking point. Once the bond of trust is shattered, it unleashes an intense tide of emotions in the person that has been betrayed.

There can be any number of reasons for betrayal to occur within relationships and they are often the symptoms of long-term problems rather than the cause. For instance, the one who committed the act of betrayal may have tried unsuccessfully to resolve the underlying problem which has increased over time.

Relationship counselling gives people a framework to help them analyse and work through their issues of hurt and trust. Through this process it is very possible to restore feelings of intimacy and goodwill. This page will cover in more depth how counselling can be used to generate positive outcomes following an affair or betrayal. It will also look at reasons why betrayal can occur and what the consequences can include.

Why do affairs and betrayals happen?

There are numerous reasons for people to betray someone’s trust or commit an act of infidelity. It depends on the circumstances and needs of the people involved. In general, the reasons can be divided into two main groups - to save the relationship or to end it.

To save the relationship

In some cases people will commit a betrayal or affair in an attempt to address a need that is not being met within the relationship. They may see the rest of the relationship as being healthy and they want to hang onto it but they just need this extra ‘thing’ to complete the picture. For example; if one partner has a chronic condition that causes a loss of libido or sexual function, the other may initiate an affair in order to meet their own sexual needs or to get away from the problems that have occurred within the relationship as a result of the condition.

In situations like this, the person doing the betraying may also seek to meet their emotional needs such as connection, admiration and validation.  This can happen following the birth of a child or some other life-changing event.

Sometimes, the one who committed the act of betrayal may have depression or a chronic condition themselves which may make them behave differently or they may want to hide the problem from others.

Another example of someone intending to save the relationship would be a gambler who wants to win ‘the big one’ in order to create a better life for their family.

Sometimes a betrayal may be a misguided attempt to regain power within the relationship following an unhappy or difficult situation. Through an affair feelings of anger and loss can be dispersed temporarily with no regard for any consequences.

To end the relationship

There are some cases where the perpetrator may carry out an affair or betrayal as a way to seek pleasure, excitement or opportunity. It may even be to increase their social recognition or to raise their self esteem. This creates a very unbalanced relationship as that person is putting their need for gratification ahead of the needs of the people around them.

Discovering an affair or betrayal

It can be extremely upsetting and even life changing for someone to discover they have been betrayed. There is a deep loss of trust and the intensity and range of the feelings that follow are often similar to those that occur after the death of a loved one.

Experiences of grief can occur after any negative life-changing event. Grief for the loss of the initial happy relationship, for the loss of trust, security and respect and also for the loss of an expected ‘perfect’ life that will no longer be possible are all real and normal reactions to a betrayal.

Once a betrayal has been discovered it may open the floodgates for a torrent of emotions and questions for both sides but especially for the one who has been betrayed. Feelings of uncertainty and confusion will most likely occur and each party may find themselves questioning not only their relationship but many aspects of their identity and their lives as a whole. Their questions could include:

The person who committed the betrayal may also be very confused and distressed about their behaviour and feel extremely guilty – especially if they did not set out to hurt the other person. They could also have questions such as:

Relationship counselling with an experienced therapist gives people a vehicle through which they can reflect on these questions and progressively work through them. Learning how to process the situation in a non-judgemental way can help foster acceptance and lead to a better understanding of what happened.

After a betrayal has been uncovered both parties, but especially the person who was betrayed, will experience a massive cocktail of emotions. After the initial shock , strong feelings of anger, resentment, blame and bewilderment can rise to the surface. These may prompt knee-jerk reactions such as filing for divorce or blocking all forms of communication with the perpetrator.

These are known as ‘flight or fight’ responses and stem from earlier times of hunting and gathering. They are our body’s way of signalling danger when in threatening or dangerous situations and prompt us to escape or find a means of defending ourselves.

Loss of predictability and certainty will also contribute to knee-jerk responses. It is also common for either party to want to run away from the situation instead of dealing with it.

When someone learns they have been betrayed by somebody they trusted and cared for their emotional turmoil can manifest into physical symptoms. They feel their world has been almost literally turned upside down and this can generate feelings such as dizziness, disorientation, nausea and even out-of-body sensations. These symptoms are normally associated with shock and trauma which, in a sense, is exactly what has happened. They may find it difficult to accept the situation and may remain in a state of denial or disbelief which is unhelpful and inhibits their ability to begin the healing process.

Effects of affairs and betrayals

In the aftermath of a betrayal the one who has been betrayed may not allow themselves time to think rationally and they may become focused on ways they can deal with the problem or make the pain go away instantly. Usually, the methods they choose are inappropriate or ineffective. They may even complicate the problem further and block any chance of resolution.

A common initial response to a betrayal is to demand full transparency from the perpetrator. This could include insisting on having full access to all forms of communication such as emails, phone messages and social media sites. They do this with the intention of recreating trust however it rarely works and can even backfire, causing even more pain and distress. While the reaction is understandable, it does nothing to address the original issues.

Wanting to know the details

Sometimes people may want to know every intricate detail of the affair or betrayal so that they can analyse it and deconstruct each stage in order to try and gain some understanding of the truth. On the surface, this may seem a helpful way to regain some measure of control, especially over strong feelings of hurt and mistrust.

The danger with this approach is that the details may be used in the future as a weapon used to inflict further pain and havoc. Also, the one who has been betrayed may easily develop an obsessive desire to continue interrogation and may not know where to draw the line. While it is certainly helpful to discuss all aspects of the betrayal to identify the underlying problems, it can be very easy to slip into a cycle of blame or denial. In counselling sessions, an experienced therapist can carefully guide both parties through the details without getting bogged down in them. Once the details have been explored, everyone can move forward in the healing process

The intensity of emotions that rise after the discovery of a betrayal may trigger the one who has been betrayed to pursue some form of revenge in retaliation for the hurt they have suffered. They may experience a deep sense of injustice followed by a burning desire to restore or inflict justice on the other party.

While this may allow them to release the pent up energy caused by the pain and hurt they have experienced it doesn’t resolve a thing. The only way for them to truly dissipate these negative feelings is through understanding and forgiveness. Relationship counselling allows people to see that this is a real and achievable option.

Most of the couples who have been through a situation of betrayal do pull through it. Many of them have developed a much richer and deeper understanding of each other through the counselling process.

Relationship counselling works because it addresses all aspects of an affair or betrayal, not just the act itself.  It allows all parties to explore the factors leading to the betrayal as well as the full impact it has on everyone involved. It creates a channel though which people can slowly understand and accept what has happened and it gives them a way to move forward together. People can begin to heal and grow through their strengthened bonds, rebuilt trust and better communication.

In this form of counselling the therapist can help to clarify the true strengths and weaknesses of the relationship. Unhealthy patterns such as emotional dominance or abuse or co-dependency can be revealed and then replaced with more positive approaches.

The sooner couples begin to undertake counselling, the better their chances of containing the distress and shock that often follows. It gives them a safe and controlled setting in which they can:

By addressing the long-term underlying issues and then promoting understanding and acceptance of the betrayal counselling can go a long way towards restoring a healthy relationship and preventing it from lapsing again in the future.

What should I be looking for in a counsellor or psychotherapist?

There are no official requirements for a relationship counsellor to have a particular qualification or level of training; however it is a good idea to check that they are experienced in the area(s) where you want help.

Using a therapist that has recognised qualifications in some form of relationship counselling will help give you confidence and trust in them.

It is also useful to see if they are a member of a related professional association as this will show they have completed specialist training in their field.