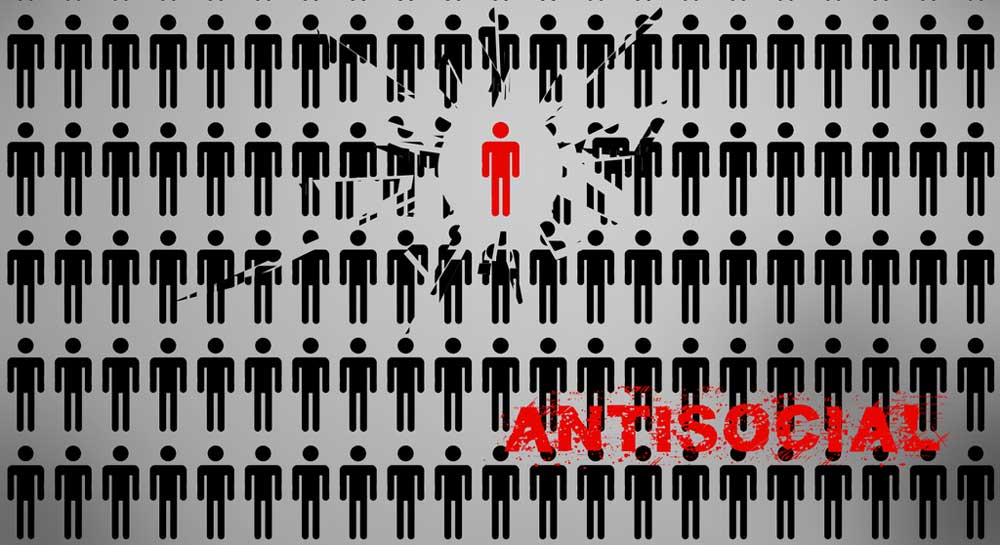 What is Antisocial Personality Disorder (APD)?

The development of APD can be triggered by several biological or environmental factors.

Studies have shown that those with the condition often show unusual brain activity. Neurotransmitters – the brain’s chemical messengers – can be blocked or defective. They include the hormones testosterone, cortisol and serotonin. When these levels are abnormal, behaviour can be dramatically affected.

These abnormalities may be the result of genetics, childhood trauma or head injuries.

Cultural and parental influences can also be contributing factors. People who grow up in an environment where violence and aggression are the norm may learn to mimic these behaviours. In some cases the condition may develop as an extreme form of rebellion against childhood circumstances.

What are the most common symptoms?

People with Antisocial Personality Disorder demonstrate a number of extreme, negative behaviours such as:

Those with APD are virtually incapable of showing empathy, guilt or a moral conscience. They often have an intense desire to appear infallible or in control. While it is possible for people with Antisocial Personality Disorder to begin personal relationships, they rarely maintain them. Their behaviour is usually very detrimental for the people around them.

What are the main treatment options?

Treatment for those with APD is often initiated by a family member or through a court order. It is one of the most difficult mental health conditions to treat as the person usually fails to see themselves as the problem and can be very aggressive towards anyone who attempts to rationalise with them.

Experienced mental health professionals will understand this limitation. Instead they will aim to provide a strong incentive for the person to cooperate and modify their behaviour. This could be a reduced sentence or fewer therapy sessions. As sufferers of APD can find it very hard to trust others, the counsellor will work hard to build some rapport with the person as early as possible.

While medication may be used to help control symptoms of related conditions like depression it is generally ineffective for treating APD.

Psychotherapy has been proven to work well for people with Antisocial Personality Disorder. The most common form is Cognitive Behavioural Therapy (CBT) but Family Therapy and Group Therapy may also be incorporated into a customised treatment plan. In many cases, treatment may also be needed for depression, other personality disorders or substance abuse.

During these sessions, the counsellor will aim to help the person see how their actions affect others and to reflect on the possible causes of their behaviour. Breaking the negative thought patterns and replacing them with more constructive ones is fundamental for successful treatment.

Even though there is no real ‘cure’ for APD, sufferers who are committed to change can go a long way to avoid further criminal involvement and learn to engage in healthier, more positive relationships.

Mental illness can be frightening and isolating, especially if you are in a depressed or suicidal state. Talking to friends and family may help but having the support and guidance of a professional counsellor is usually more beneficial. Therapy sessions are confidential and non-judgemental. Seeking help early gives you a greater chance of overcoming your condition and getting your life back to normal.

Our True Counsellor Directory lists hundreds of psychotherapists and counsellors from Australia.

Some psychotherapists and counsellors listed in our directory offer counselling over the phone and online in addition to one-on-one consultations. Many also offer workshops and seminars.