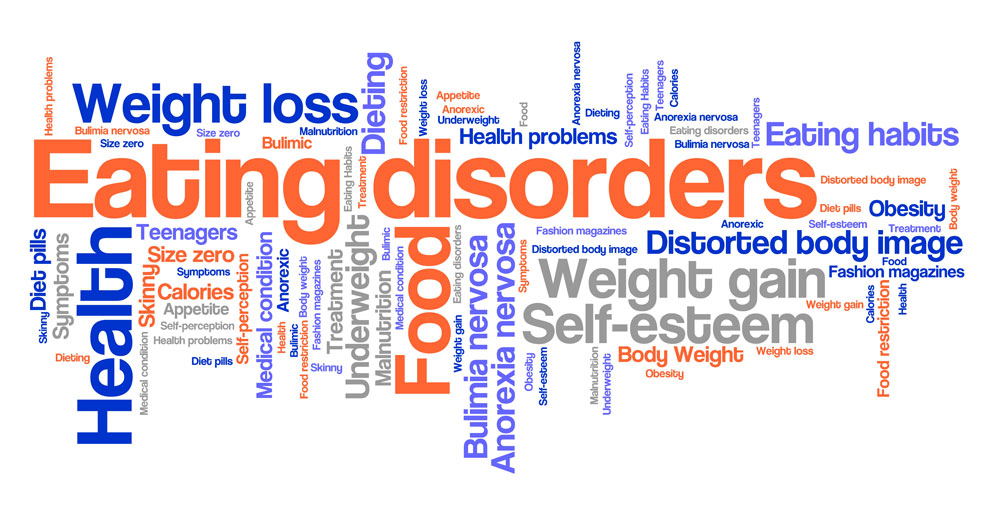 What are eating disorders?

Eating disorders are serious and diagnosable mental illnesses. They are characterised by an unhealthy preoccupation with food, eating habits, exercise, weight and body shape. Someone with an eating disorder may see themselves as being overweight or unattractive. This lack of self-esteem may lead to changes in their eating habits which can then affect their physical and mental health. It is not a lifestyle choice. In fact, eating disorders can have a very negative impact on the person’s daily life.

What are the main types of eating disorders?

There are four types of eating disorders recognised by The Diagnostic and Statistical Manual of Mental Disorders (DSM).

How common are they?

According to the National Eating Disorders Collaboration, around 9% of Australia’s population are affected by eating disorders. The disorders not only affect individuals, but also their family and others around them.

Eating disorders affect both men and women across from all age groups and backgrounds. However, some disorders are more common in particular age groups such as early adolescence and the late teens.

What are the general symptoms?

Symptoms vary among individuals and they also depend on the type of eating disorder. They can be psychological, behavioural or physical. Some common symptoms include:

There is no single factor that triggers the onset of an eating disorder. Theories differ, but experts agree that there are a number of factors that cause the disorders. Often, they unconsciously develop as a type of coping mechanism for other life stressors.

Yes, the good news is that eating disorders are definitely treatable and many people do recover from them with the right treatment and support. Treatment options will vary depending on the diagnosis but will usually include physical, nutritional and mental health management with a team of professionals starting with a General Practitioner.

Individuals with these conditions often need help to remember what ‘normal’ eating patterns look and feel like so they may need to start with small steps to change their patterns over time. They may also need to address the biological imbalances and deficiencies caused by their condition.

Different forms of counselling and psychotherapy, such as Cognitive Behavioural Therapy and Interpersonal Therapy, can be used to help the person address the underlying thoughts and beliefs that have influenced their behaviour. Other, complimentary treatment approaches include self-education, support groups, and (where necessary) medication.

For most people; learning to deal with, or even overcome, eating disorders is a medium to long-term commitment. Some may relapse and then try a different approach but, as when breaking any habit, perseverance does pay off in the end and many will develop far more healthy beliefs and behaviours.

If you, or someone you know, shows signs of an eating disorder, it is important to seek help as soon as possible to reduce the likelihood of permanent harm.