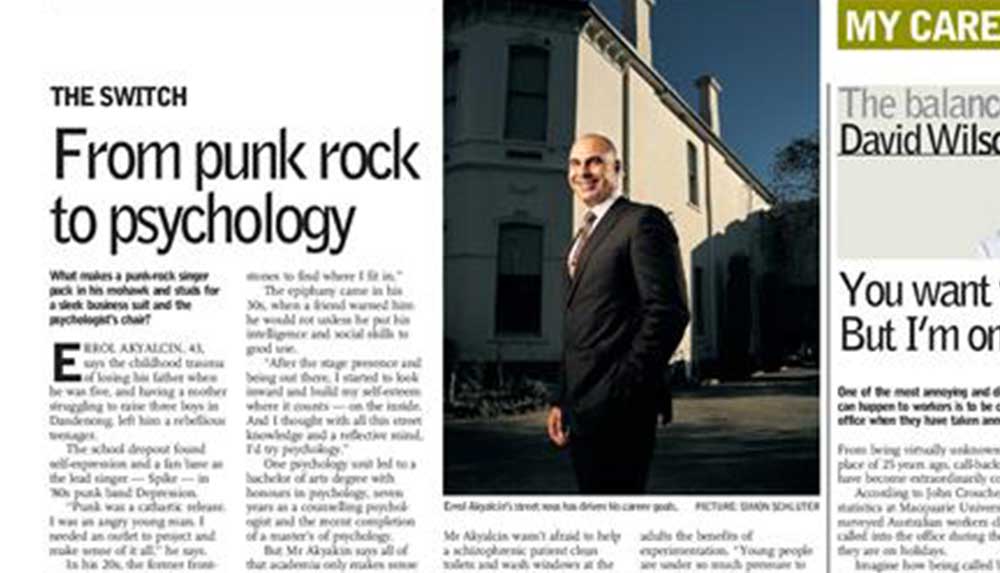 From Punk Rock to Psychology

What makes a punk-rock singer pack in his mohawk and studs for a sleek business suit and the psychologist's chair?

ERROL AKYALCIN, 43, says the childhood trauma of losing his father when he was five, and having a mother struggling to raise three boys in Dandenong, left him a rebellious teenager.

The school dropout found self-expression and a fan base as the lead singer - Spike - in '80s punk band Depression.

"Punk was a cathartic release. I was an angry young man. I needed an outlet to project and make sense of it all," he says.

In his 20s, the former frontman sought other professions to build his self-esteem, working as a body builder, fitness trainer and nightclub bouncer. His imposing proportions also earned him work as a film and TV extra, playing thugs on shows such as Stingers.

But the limelight masked an internal suffering, which he recognises only now as a psychologist.

"If I look at the manuals that we use for diagnosis, I reckon I had five or six disorders - anxiety, phobia, depression . . . but I used those jobs as stepping stones to find where I fit in."

The epiphany came in his 30s, when a friend warned him he would rot unless he put his intelligence and social skills to good use.

"After the stage presence and being out there, I started to look inward and build my self-esteem where it counts - on the inside. And I thought with all this street knowledge and a reflective mind, I'd try psychology."

One psychology unit led to a bachelor of arts degree with honours in psychology, seven years as a counselling psychologist and the recent completion of a master's of psychology.

But Mr Akyalcin says all of that academia only makes sense when you use your own turmoil for personal growth.

As a shrink from the school of hard knocks, he credits his colourful career and personal hardships for having made him a psychologist with human insight and empathy.

"Because I didn't come to psychology with a silver spoon in my mouth, I have a humbleness that people respond to. I came from the streets and worked my way up, so people who come to see me sense that I have life experience," he says.

With his blue-collar roots, Mr Akyalcin wasn't afraid to help a schizophrenic patient clean toilets and wash windows at the local church - the only job he'd had in years.

"He said, 'You've taught me that I can feel worthwhile again', but what I learnt from him is that seeing others as your equal is so important in helping people heal and grow."

As the internship program manager for the Cairnmillar Institute, Mr Akyalcin teaches fourth-year psychology graduates the art of therapy.

But for those still struggling to choose a career, he says parental pressure to "get it right immediately" is denying young adults the benefits of experimentation. "Young people are under so much pressure to be perfect yesterday, but we should let them discover themselves naturally. All jobs are learning experiences."

While the late-blooming professional does miss his punk days, he says he still likes to perform - now on the lecture podium.

"I have an occasional fantasy about going back to rock'n'roll but rather than hark back to my past I use that energy and that personality in my lecturing work."